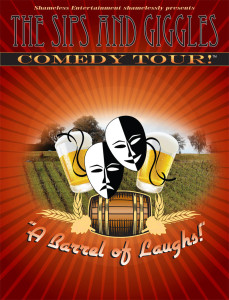 Some doctor’s say, “A glass of wine a day is good for
your heart”. Others say, “Laughter is the best medicine”. We
say, “Why not the best of both worlds”?

Our goal is to elevate and enrich the “wine experience” with the ultimate
pairing of “ vintage wine” and “finely aged comedy”. Our vast experience
and commitment to excellence inspires us to create a unique and flavorful
entertainment blend that adds value to each winery and their fine wines.
By delivering more joy and laughter to each table, we hope to pour a memorable
marriage of “sips and giggles” that dances on the palates of wine conosuerrs
for years to come.

Shameless Records, Inc. was formed in 1996 as a comedy record label.
With interests in diversifying into producing live shows and on-camera
projects, we changed our name to Shameless Entertainment, Inc. in 2000.
“The Sips and Giggles Comedy Tour” was formed in 2010, and is the brainchild
of Comedians’ Vince Valenzuela and Brad Upton. With over 50 years
of stand-up comedy and entertainment experience between the founders, they
understand that like food and wine, you need to pair “the proper comedian
with the right winery audience”.

Comedy and wine are more similar than they are
different. They are both the ultimate expressions of their maker
and both have to grow in the right environment to be successful.
Like a great wine, it takes a visionary and years of hard work to cultivate
a great stand up act. It’s truly is a labor of love that is not a sprint,
but an endurance race. It’s lived and breathed on a daily basis.
It’s starts with a seed of an idea that is carefully tended to, nourished,
experimented with, and at times, obsessed over in order to find the perfect
combination that is original, bold, and compelling. The meticulous
attention to detail results in a refined, distinctive style that seems
effortless to the consumer, but oh-so entertaining and enjoyable!

Shameless Entertainment uses only the top professionals in the business,
with no less than 20 years of experience. There’s no scenario these
comedians haven’t dealt with. They know how to be hilariously funny
without being offensive. Remember, “The Sips and Giggles Comedy Tour
is Red, White and not Blue”! Our comedians have appeared in numerous
television shows and films. They perform at Fortune 500 corporate events,
open for the biggest names in show business, and headline for all the major
cruise lines and comedy clubs. They truly understand and respect
what is appropriate in a winery setting. Shameless Entertainment
understands you run a business and the audience are your customers.
We only use seasoned professionals and we want to provide the best “custom
comedy fit” for your mature and appreciative audiences. We
want to take the time to get to know you and your winery’s personality.
To cultivate a relationship and understand what your entertainment tastes
and needs are in order to bring highest quality of entertainment to your
establishment.Our vast performing/production experience, our attention
to detail, and our “hands-on approach”, sets us apart from the rest of
the pack.

Shameless Entertainment offers a variety of entertainment packages as
well as all of the promotional materials you will need to offer your loyal
wine lovers a classy evening of great wine and laughter!

In a perfect world, we envision a tour that would several nights in a
row. As an example, the tour could start on Wednesday in Yakima Valley,
Lake Chelan on Thursday, Tri-Cities on Friday, Walla Walla on Saturday,
and Spokane on Sunday. By stringing consecutive nights together,
this will provide an opportunity for each winery to lower their cost per
show and it also makes it easier to book the acts. It will be entirely
up to the individual wineries to set their ticket prices, as you know your
audience better than anyone else. Ticket packages may include; 2
glasses of wine, wine and appetizers, a bottle of wine, dinner packages,
dinner and room packages, etc., the combinations are endless.